The whole switch to Type-C USB and associated jumble of Type A to Type C cables, Type C to Type C Cables, Type A Chargers and Type C Chargers as well as the jumble of information has made everything confusing as ever, as it was charge rates on standard USB 2.0 and 3.0 charging was confusing with rates advertised up to 2-3Amps and real world charging down to as little as a tenth of a amp in some cases, i really wanted to see what kind of rates i was really getting, and while i was at it, compare the multiple (two) Type-C cables i have and just to throw something in the mix i use sometimes, a Type-C to Type-C extension i bought to see if the Karma Grip would work with this between the handle and the gimbal head (surprise, it doesn’t.) for a post that quickly never was to be…

Anyways, Just like the SD Card testing I did and have been doing i wanted to get a comprehensive list of everything i had, which as this point for Type C Chargers i had the GoPro SuperCharger, the Aukey 24W Dual 2.4 PA-U38, and the Tronsmart 30W Dual USB Car Charger.

As for Cables i have the OEM GoPro Type A to Type C cable, the GoPro C to C cable that comes with the GoPro Supercharger, and i also had a Anker Powerline+ C to C 2.0 cable.

I tested each one by plugging it into a ______ USB C tester in between the charger and the Device as well as throwing an C to C Extension cable to see if that made any difference. 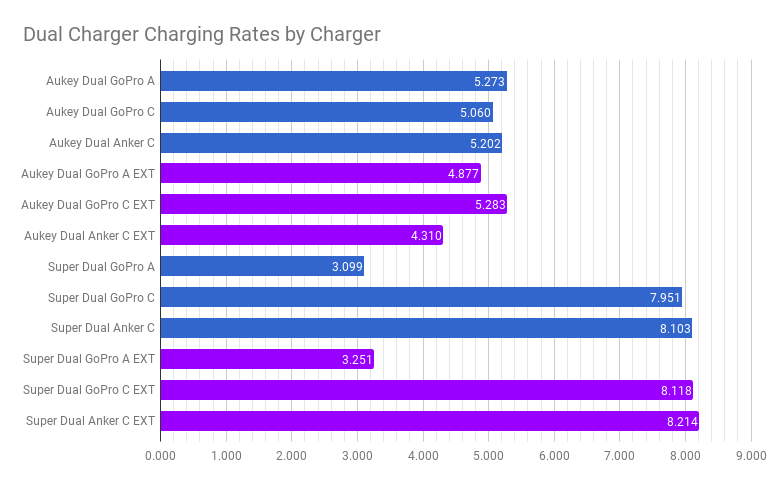 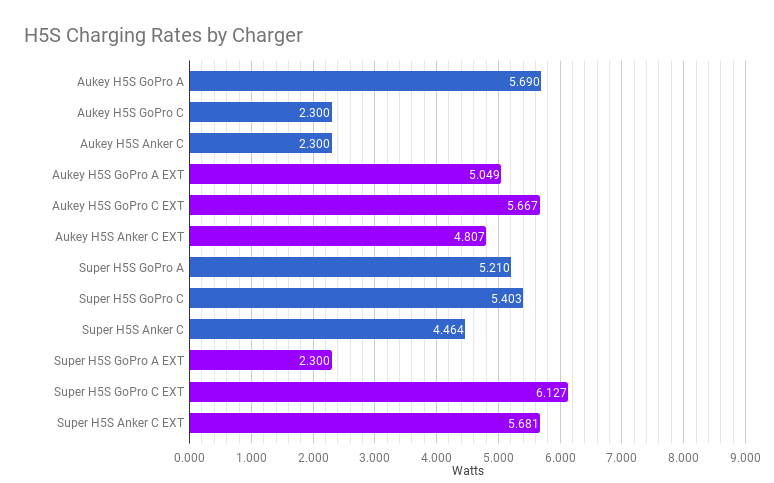 I still have a couple options to try as you can see i only really tried it with the Hero 5 Session, i have to try it with the Karma and the Hero 5 Black, one of the most consistent things i found is that when i have an extension added to the USB-C it tended to add more power to the charge, the other thing i noticed was that the traditional Type-A to Type-C adapter that comes with the cameras tended to charge at higher rates than running direct C to C, im not sure if running C to C is somehow smarter like when you use a LiPo charger to charge multirotor batteries, it senses the battery level and dynamically adjusts the output to lower as it hits that last 15% of battery, one reason i think this is because as you sit and watch the amperage drops the longer its plugged in, i would think that would be on the camera side and it shouldn’t make a difference, but maybe somehow there is a communication on the charger on what kind of draw it wants it to give and not just a blanket 100% output like traditional charger would give?