I have had the grip now for 7 months and  has moved down to GREAT, maybe SWEET, but not quite awesome. Stability wise, yeah its great great great, but then things fall off quickly as you get to use it more and more.

The main fallback is the interaction, or lack thereof, between the GoPro Hero5 and the grip itself. Less and less does this interaction happen at all, if it does it stops happening mid way though. Sometimes powering down everything and restarting helps, sometimes unplugging the GoPro  helps, but most times no amount of resets, power-downs, remove-reinstalls helps, and as of this last trip yesterday i went the entire day without a single interaction, i had to 100% power on, start and stop the camera on my own, the Karma grip was basically there to stabilize things…

The battery would still be awesome if it was replaceable, but as of last use (7-12-2017) it lasted me from about 12:30pm to about 4:30pm on our recent trip to the SF Zoo being on almost the entire time, i cant really complain about that much usage on a single charge, so as a wishlist item for lets say a Karma Grip 2, i would say replaceable batteries would be an awesome addition.

so yeah, it does what it does great, all the extra stuff like turning the camera on/off, switching modes, tagging, none of that works. thats pretty major in the usage of something thats designed to be used in the midst of action, or alot of movement where you dont always have two hands free… Its just another notch in a long line of gripes with a company i both love and hate, but thats a whole ‘nother rant to post about….

Until then heres the latest Karma Grip Video :

I have had a limited time with the GoPro Karma grip, but what little time i have had with it, its friggin’ great! I was already excited based off of the hype reel from GoPro, but always skeptical i had to see for myself, so when my brother got his hands on a karma kit i had to borrow it. I took it for a run around the block and completely expecting it to not be able to keep up with the aggressive movement that can come with handheld recording while running, but compares to holding a bare camera by hand it is frigging amazing.

Some Photos around the thing. 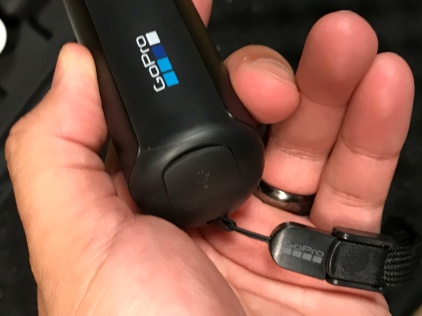 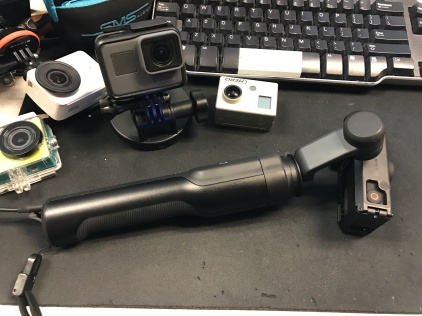 So what about the OSMO Mobile?

Osmo had definitely had me sold, until i tried the Karma grip, the Osmo was great except for the price tag at $599, then DJI came out with the OSMO Mobile for $299, great i thought! my iPhone camera has great video,  but when you think about it, if i fall, there goes a $700+ phone, plus a $299 gimbal, if the Karma falls i may break the Karma, but the GoPro is covered with either GoPro Care or that BestBuy insurance that everyone is getting so much use out of lately, the cost to get back going is alot less in that situation.

Then there is the app, sure DJI has that tracking feature, thats sweet, so long as the app can see the subject it can follow it with varying degrees of success, we had maybe a 60% success rate with testing it, sometimes it just wouldn’t follow, most times it would. Either way, 60% of something is better than nothing. The app does have its downsides though, like how the heck do you get your video files off your phone? its like impossible to transfer a full file from the app to your photos album? unless im missing something the only way to extract was through iTunes on my desktop. Then there is the bluetooth /wifi syncing, the set up and go from nothing is not just pick it up and go.

Karma setup After initial setup and camera already in gimbal:

If i was already walking around i can literally grab the Karma grip, press record and it powers on and starts recording, then stop recording and it will turn off and i can throw it in my bag, you cant do that with the OSMO.

The last advantage for the OSMO is the Joystick and other shooting modes, the fact that you can do autopans is great, and the fact that you can mount it on a tripod and control the gimbal from however far the signal will connect is great, you can move the camera remotely through the app, that’s awesome feature which i wish GoPro had. The Joystick is a great feature also because you can sit there not moving and track someone manually, or do a pan or tilt which is great, you cant really tilt on the karma, you can adjust the tilt but i don’t think you can like use it to track a vertical movement by tilting back like you can with the joystick on the OSMO.

I dont have much for now, i want to do more of a direct side by side, but for now here is the OSMO:

and here is the Karma on a similar path indoors:

For me the OSMO was awesome, until i got my hands on the Karma Grip, and the stabilization on there just takes things to a whole ‘nother level. I cant wait until they release it for the Hero 5 so that I can get my own and not have to borrow one.