I have had several action cameras, my first going back to a cheap VGA Tony Hawk action camera which was cute but really unusable. I then moved onto the Tachyon XC which was really neat for the time but jello, low resolution and a string of bugs issues led to me having to RMA the two cameras i had at the time, i quickly moved onto the GoPro 960, this was a game changer for me, the quality was great, the jello was alot better than the Tachyon and the battery life was sweet 2.5 hours. I jumped at the Hero 2 and it was great as well, better image quality, great battery life, lots of accessories. Then the Hero 3 came out and the price was crazy at $399. I held off until my wife surprised my that Christmas and got me the Hero 3 Black Edition. The Image quality was great, the video quality was awesome, and the menus compared to the hero 960 and hero 2 were great. Unfortunately i quickly learned the “4K” option was all but useless, who wants to film in 15FPS? even worse is god forbid you actually film high bitrate 45Mbps (4K, 4Kc, 2.7K, 2.7Kc) because at the time SD manufactures seemed to play a bit far and loose with their ratings and all but the best cards would cause issues where the camera would stop recording for seemingly no reason and you would have a 4 hour timelapse ruined after a measly 10-15 minutes.

But wait there is more, Shooting in the cold? well better stock up with anti-fog inserts because the camera gets so hot that it immediately fogs up in the cold and after maybe 15-20 minutes it usually shuts down from extreme temperature, especially if you are recording in the waterproof case.

Then there is the whole issue with the battery, not only did they change the form factor of the hero 3 they also changed the battery, Anything above 1080/60 and your looking at maybe 20-30 minutes per battery, if your lucky, dont expect to use any Wi-Fi or ProTune  because those just kills your battery even faster.

It was a great camera and was good for short clips here and there but i mainly got through the years having to get any long duration shots with the Hero2 or the Xiaomi Yi camera i picked up.

The Xiaomi Yi was a great camera, upgrade the firmware and coupled with the Waffle Scripts and it had tremendous power for a camera that ranged from $69-$90. 2K video, 1080/60, night scripts for low light, wifi, great battery life, etc. The only downside was that any changes to scripts required a computer and any changes to the software or even to change modes requires connecting to a smartphone through wifi. all in all because of its cheap price it became my daily camera, i wasn’t scared to actually use it because it wasn’t a $400 camera like the GoPro was, parts for it were cheap, cases, batteries, lenses, etc all reasonably priced to the point where you don’t think about consequences before you use it for what its designed, Action and Extreme shots. to allow you to strap it to anything and get that unique angle and image from a different perspective that one could get with a camcorder or DSLR.

In comes the Yi Technology Yi4K. Im still not positive on its exact name, Yi2, Yi4K, Yi 4K? im not even positive the company. The previous company was Xiaomi, but also went by XiaoYi, and now its website and new social links are Yi Technology.

Anyways, the Specs along on the new Yi are impressive.

Lets start with the most important to me, the battery life, I have not done a beginning to end video (*yet) but i have been using this along side my Hero3BE and I have yet to run out of battery on any of my sessions, be it a timelapse drive, or a bunch of small comparison videos, i go out, shoot, come home and top it off. In contrast i have 6 GoPro batteries and i usually go through at least two to three batteries per outing. I can confirm the battery life is pretty damn good, I don’t have to constantly check in with the camera and see what the battery life is because i know its good.In a recent trip to SFZoo i had went through 5 batteries with my H3 video using the LCD bacpac in the same duration that i went with two batteries of my Xiaomi Yi Video. If i had my Yi4K i wonder if i would even have needed to swap batteries at all. which leads me to the Touch Screen.

Having skipped the Hero4 Silver and the Hero+ LCD cameras i never really had any experience beyond the LCD BacPac’s which were a bit disappointing. the first generation of  LCD bacpac i got my dad for his Hero2, it showed video, helped you crop out shots, but drained the battery like crazy.

I recently got the second generation of LCD bacpac with the touch enabled for my H3 and it cool, it definitely helps line up shots and compose your picture, and it does better with battery consumption but it still sucks off the battery and makes the already short video time shorter. The Yi4K touch screen is nice and crisp, alot clearer than the GoPro’s screen. the touch is nice and sensitive. Comparing both touch screens the GoPro Touchscreen feels like an older analog resistive touchscreen especially when its in the waterproof case, you poke it with your pinky and dont do much sliding, even though i think it is capable because it is a capacitive touch and you can slide, it just doesn’t interact like one, but it does. In comparison the Yi4K screen has a nice bright screen that you can gently tap or slide you finger across. The interaction is akin to navigating a modern smartphone screen, its smooth and accurate enough to have switches within the buttons in the menu. They could have probably done some virtual jog dials to change from mode to mode, but instead what they did was swipes. Left and right to change between last used Photo and Video modes. Swipe down to access a sort of quick menu that has Wi-Fi, Bluetooth, Screen Lock and Power buttons. Swipe up to access the Modes menu which includes:

Bottom left of the screen has a playback button, and bottom right has a settings button where you can easily have access to all settings.

Ok enough specs, lets get to the meat.

Photos are pretty great. I almost never use the thing for taking photos because thats the purpose of the DSLR or in a pinch my phone, but if its already in hand why not. 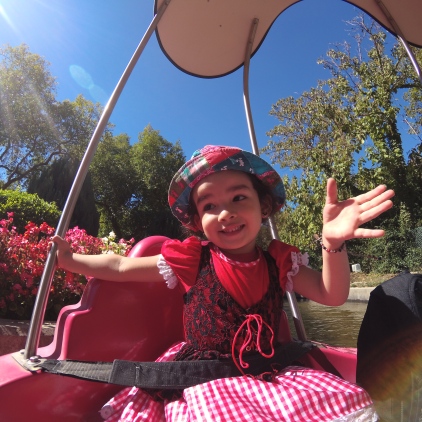 Sun from the side

Sun in front in shade

For the variety of mostly not ideal shooting conditions and handheld i think the photos i get from the camera area pretty darn good. Of course for such a small sensor night shots are a bit tricky and will have some issues, i have no tried any advanced settings like night mode or long exposures or high ISO settings with the camera because i just don’t use it for that.

Video on the Yi2 is some of the best video of all my cameras, its right there with my Hero3 Black (** also the Hero 5, review coming soon…)

To sum it all up, for half the price of the Hero4 Black i think this is a no brainer for someone like me, the value brings so much to the table over a Hero4 Black or Hero4 Silver that i think of course, why pay $499 for a gopro when you can pay $249 for this and get better wifi, better sensors, similar video quality, an awesome touch screen, and