I’ve been looking at Quadcopters for some time, but the main problem I have had with them is the price for entry into the hobby was too much for anything with the capability to carry one of my Gopro cameras. Sure there has been several cheap options for flying quads under $1-200 but most of those little micro quads are akin to disposable little quads you pickup for $30-$40 go out and play with and trash when they crash and break their proprietary parts, I bought a few for my nephews but never for myself. I wanted something more capable, something worthy of capturing quality video/photo and I just could do it without going into that parrot/DJI/3dr range and spending over $1000, that’s just not “hobby” prices to me. I really wanted something I could just build myself, mechanics are easy, wiring and soldering is easy, but electronics I’m not so confident on, I would not rather not throw hundreds of dollars in the air with something I programmed myself, I really wish someone made some sort of electronics rtf kit that had everything connected and I just built a frame for it, but I never came across anything like that.

What got me into 3D Printing was when a company came by called PrintrBot and offered a KIT version at a low and affordable price, they gave me all the pieces and best yet I was able to assemble it myself, that part is key for me because if you can build it yourself, you can fix it yourself. You know where each piece goes and what it does, it’s the best way to understand the things we use daily instead of trusting it to others to take care of, especially in this new era of overcharging for simple technology that has a “sexy” cover, fancy name and some “technology” which is typically fancy names for ordinary things.

Enough ranting. Onto the project. After CES I read an article on Tested.com showing how to build the QAV250 thy charpu flies from getfpv and lumineer. It was key as they listed just about all the right specs for parts that I could cross reference and order similar parts. Then In that same article they mentioned Hovership and the MHQ2 3D printable frame. This was perfect, a 3D printable frame and another list of parts to get which pretty much match the list from tested.

As I looked up the prices I was suprised, $24 for naze32, $12 for battery, $9 for each, all these prices doesn’t sound like the $500-1000 people charge for turnkey quads right? Granted this is a bit of a different beast, almost like a Sport hatch compared to SUV, but heck they both get you from A to B right? And I just wanted a cheap Intro to the hobby that I could fix easily/cheaply, and expand into if needed. I wrote up a price comparison in numbers for parts comparing different options, models and sources and figured I could come out just about $200 for a flying system minus FPV equipment typical in these racers, but on the bonus side, without the extra transmitter, and camera I would have less weight to carry and more likely be able to carry my GoPro Hero3 Black Edition.

So I set off with building for frame first, I threw it in Repetier and immediately ran into a problem. hovership stated that the frame will fit into a 200×200 printer, my printer was originally sold with quoted build area of 6x6x6 I believe which is 152mmx152mm, however the x axis ended up only being about 100mm width, after some mods I was able to get it to 200mm x 130mm x 220mm which is quite bigger, however still a hair too small to fit, so I had to reexamine my options. I threw the .stl files into slic3r and exported the slices to .svg files then imported those svg slices into coreldraw. I was able to get a 2D slice of all the pieces. Since I have quite a larger working area on the laser at my work I decided to use that instead. 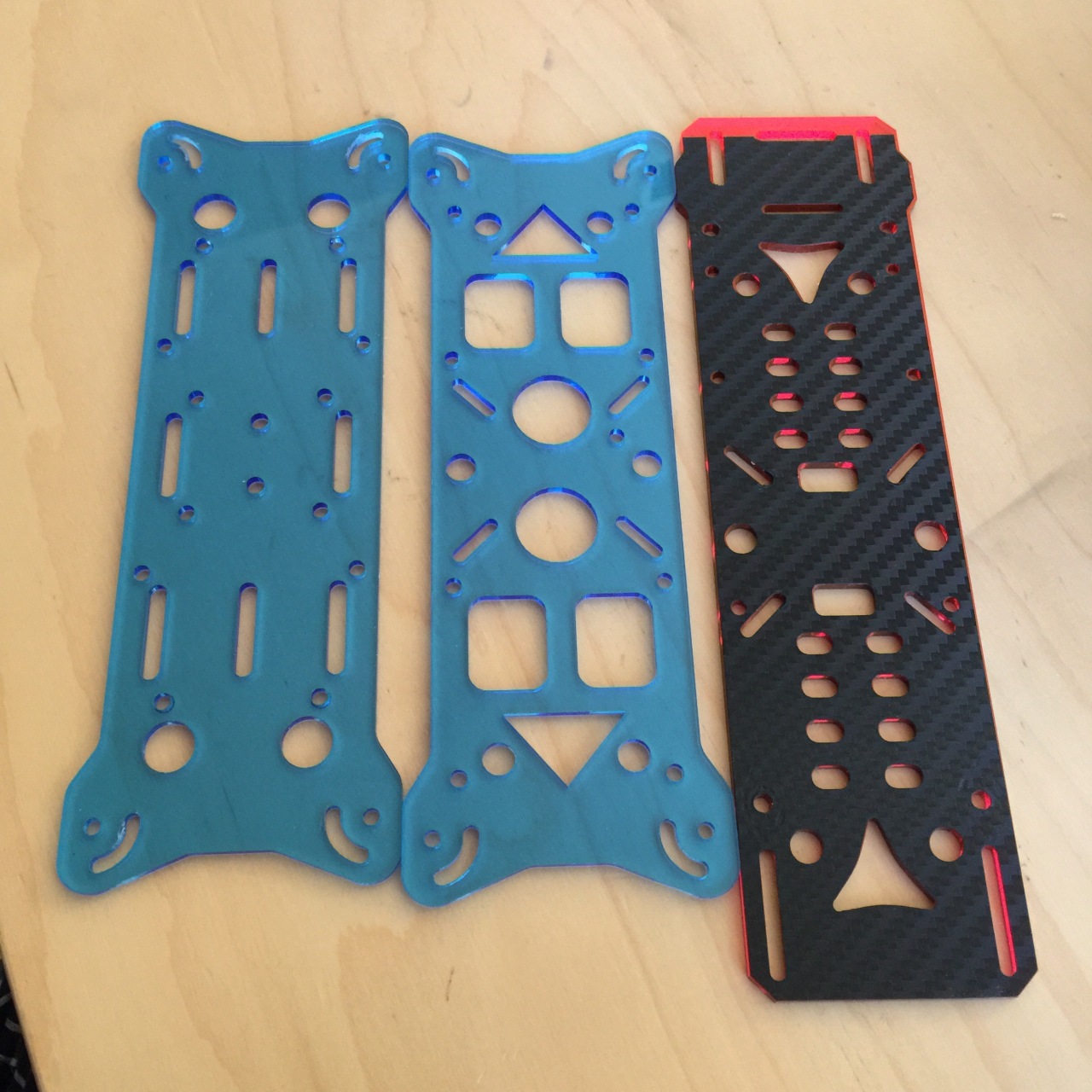 I cut out all the main frame pieces in some scrap 3mm transparent colored Acrylic I had laying around. It looks great but probably won’t last too long, but I’ll worry about that later, I’ll just cut several spare frames in case it cracks.

This was the start of a long journey, i apparently started this post back in February and never got around to finishing it up, for the sake of content im going to post this as is and continue as i find the other photos relating to it and post it in a follow up post.